Since we missed posting back in August, we're giving you a double dose update for both August and September! Let the info barrage commence!

Changes Under the Hood

Besides integrating the new Blight monster and Lich, we’ve been hard at work on the core systems that connect all areas of the game. Many bugs found since our last demo update have been fixed or are close to being addressed. We’ve implemented a new workflow for managing each content area within their own scene and seamlessly loading between them. This change in scene management required a massive overhaul to the current save system, which has also been fully implemented and will now have the save points being used going forward. We’ve also started construction on the Test Wing of the castle that will be accessed by a super secret button combination, pursue at your own risk.

While we were working on the save system, we felt it was a good opportunity for us to clean up and redesign the UI beyond its initial prototype state. First, are the changes to the Health/Mana bar as they are now represented by icons instead of a meter. 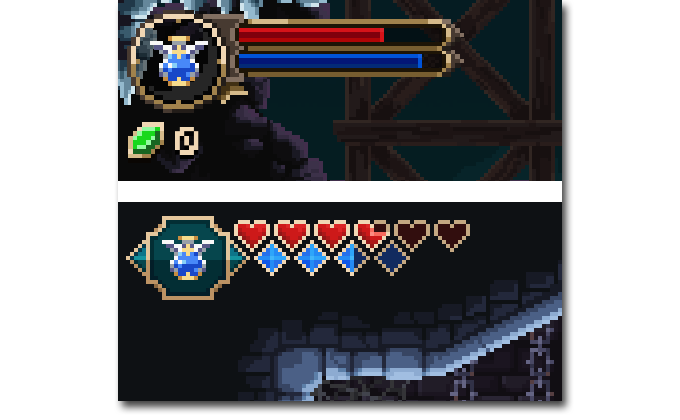 The math still works the same, but we feel this change will give a better representation of Lily growing in strength as she finds more items. The effect will feel less cheap to us than simply extending a bar. You will initially start with 3 hearts and 2 mana (with each then being cut into 4 sub sections) and it will expand from there. For now, the mana will still regenerate over time, but will be scaled appropriately. Though we are also looking into ways to balance forgoing regeneration and make mana more accessible in other ways, but we definitely need more time before we reach a final decision on it.

Next are the changes to the pause menu. 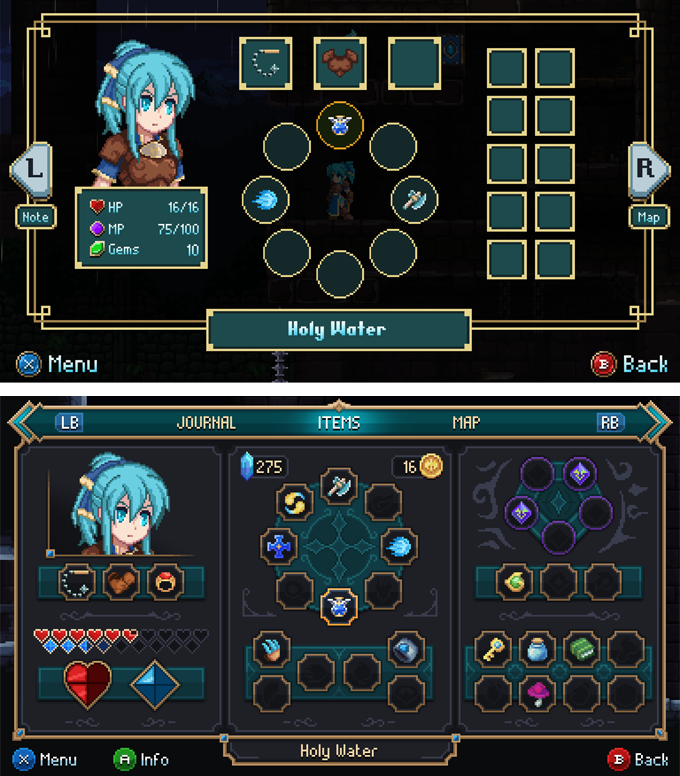 You may be surprised, but mushrooms are quite useful

The old menu was thrown together very quickly, so we were happy to finally give it some much needed love. Just as before, our goal is a menu similar to other adventure games that focus on key items, upgrades, and abilities.

Next we have our new Journal and updated Map. 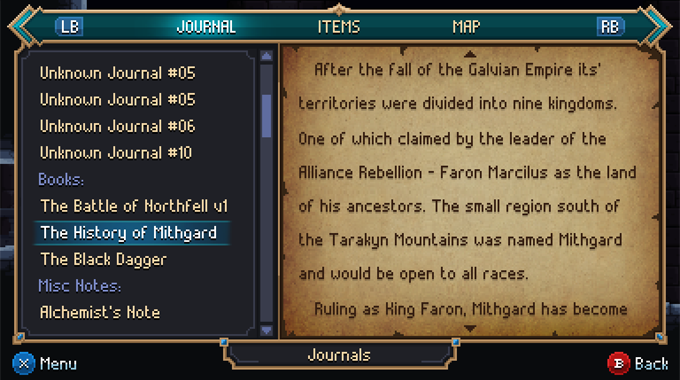 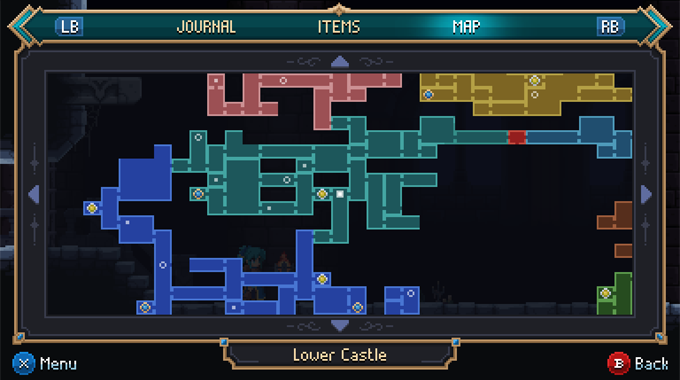 During Lily’s adventure through the castle she will find several Books and Notes that give some insight into the world she lives in, as well as clues about current events in the castle. This is also where Backers from our Lorekeeper tier and above will have some of their own lore added to the world. There will also be a Quest Log to record events that have happened and a Bestiary of all the monsters encountered in the castle.

Lance here! If engine upgrades and lots of text isn’t your thing, head on down to the next section to see some sweet art!

Since the launch of our Kickstarter we have been building the game on Unity 5.6.4. This was the last version before Unity moved to their Unity 2017/2018 naming convention. In general, it’s not advisable to change or otherwise upgrade your engine unless some fix or feature is made available that you absolutely need. About a week ago I decided to upgrade the engine to Unity 2018.2. While there was no particular fix or feature that brought on this change, I felt it was worth spending some time to entertain the possibility of updating the engine.

Thankfully the update wasn’t too harsh on the project. I was able to eliminate build errors in the first day. There were a number of warnings that have since been cut down significantly and don’t otherwise affect gameplay. The only semi time consuming issue was that our TextMesh Pro text boxes in our core scene had lost their script references and needed to be remade. Currently, I’m almost done addressing a few quirks in the weather system and then things will be back to 100%.

Even if this engine update wasn’t driven by a specific need, this process did still have two side benefits:
1. Keeping the engine up-to-date helps keep us in step with on-going API support such as Steamworks and for additional support for eventual console porting. As an example, Unity’s documentation for 5.6.4 has already been archived and has been difficult to reference at times because many links are outdated or otherwise broken.

2. It also gave me a chance to take a good look at where points of failure were lurking and to clean out things that were no longer used or needed. Because of this, I decided to reverse our usage of a third-party UI package that was unnecessarily complex and bulky to work with. Going back to my previous custom UI system was pretty simple and only needed a few minor adjustments to accomplish what we already have.

Ultimately, the upgrade to Unity 2018.2 has been a net positive and will allow us to gain access to new improvements and fixes made in the engine and make it easier to maintain the project by not letting the engine fall too far behind.

Clint here! With all of the under-the-hood changes to things like scene management, UI, levels, monsters and the engine itself, it was long since time to nail down some character designs. I have a few more characters to finish, but for now, these two are the most important. 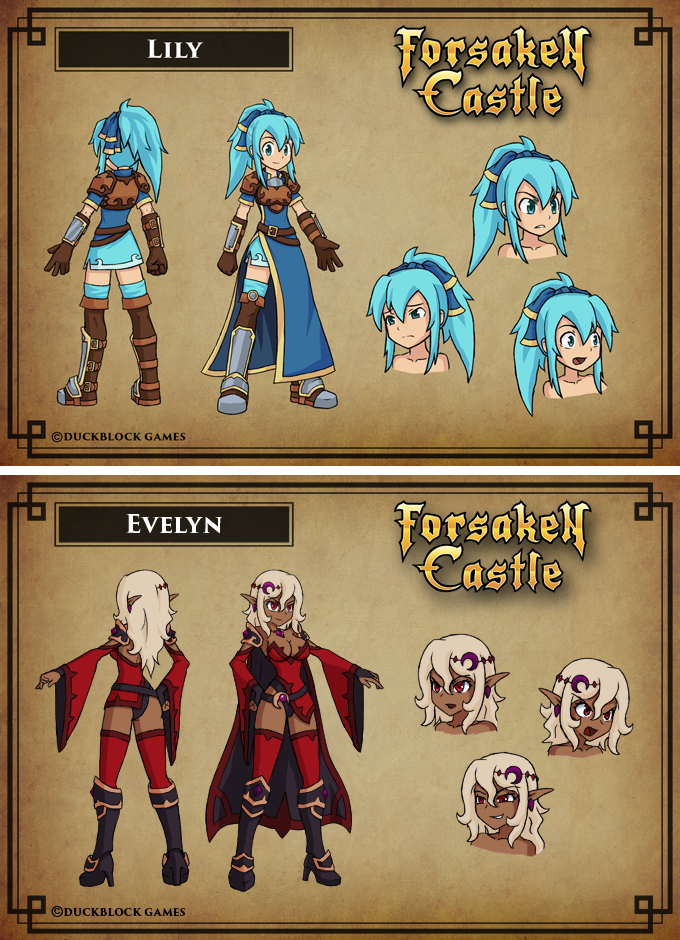 Early on, we had some pretty rough ideas, but when making original characters it’s important to have some character sheets made so we can lock things in and so we can consistently apply their design going forward. Now that we have a clear design for each of them, the next step is to ‘pixelize’ their appearance in the game. Here is a comparison from our original pre-alpha when Lily first shows up to the castle at the start of the game. 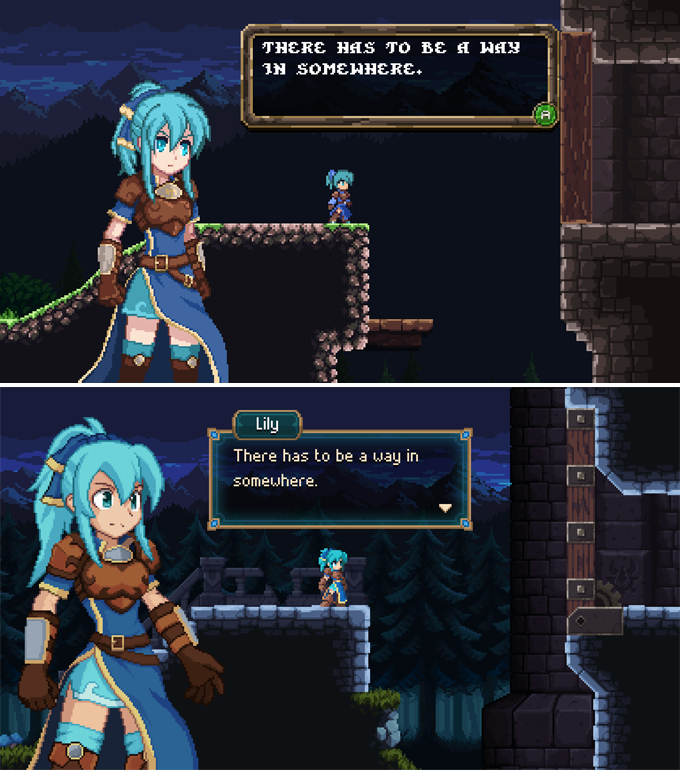 Scaling down the illustrations does help a little, but it produces some artifacts that still need to be cleaned up after. The changes will also give the characters a much needed increase in screen real estate. Doing this will make it easier to implement different poses and facial expressions along with adding some extra refinement to their details. The dialogue box has now also reached its final design to go along with the other upcoming UI updates.

Now you may have wondered, who is Evelyn? 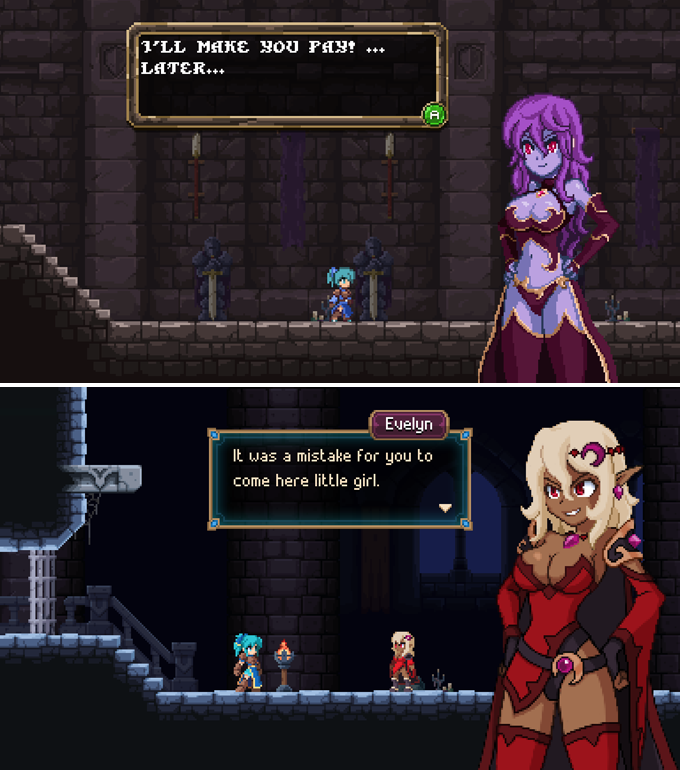 Quite the drastic change indeed

Evelyn is a dark elf sorceress that Lily meets in the castle before fighting the Lich. She has been a part of the game since the beginning, but her design was really rushed and for a long time she didn’t even have a name. We hope everyone likes the new designs and look forward to the rest of the characters showing up in the near future.

We’re working hard to get all of these updates pulled together for a new demo release that will be coming very soon. Once these touches are in place, we’ll be able to move forward with building the rest of the castle and its content.

Support Us On BackerKit!

We couldn't do this without everyone's awesome support! If you missed out on backing us on Kickstarter, it's not too late to be a backer on BackerKit with many of the same rewards still available such as getting your name in the credits among many others!

That's it for our mega double post! Once again, thank you so much for your support and patience as we continue our momentum into October and consequently, our favorite time of year. Bring on the cooler weather!

A 16-bit style, action exploration platformer, about a paladin and her fight against evil.

Ah, good to see you've made significant changes, most notably in the performance of the game via the Unity update as well as the art style. Looking forward to this game's full release! :)